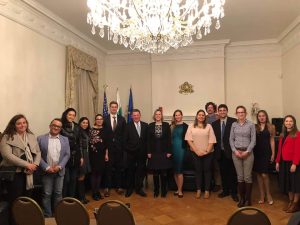 Our two guest speakers- Ms. Tamara Dancheva and Mr. Ivan Doherty- offered two insiders’ perspectives on the challenges and opportunities for pursuing a career in the international relations sector.  The panel addressed interesting questions for those interested in a career in international relations. What does it take to work across national boundaries and cultures? What are the dos and don’ts of chasing a career in the field? What are the current challenges in the industry and how can one get involved without necessarily pursuing a full-time job?

Tamara Dancheva is Head of the Human Rights Program of Liberal International (LI)- the world federation of liberal and democratic progressive political parties. As the organization’s only human rights expert, she is responsible for driving policy proposals among liberal parties and regional liberal political party groupings in the area of women’s rights, LGBTI rights, Responsibility to Protect and Freedom of Belief. Ms. Dancheva leads LI’s participation and representation at the United Nations Human Rights Council and the UN Commission on the Status of Women and is responsible for external outreach with human rights parliamentary caucuses at the European Parliament, Inter-Parliamentary Union and the Council of Europe.

Ms. Dancheva is currently on a three- month secondment with the National Democratic Institute. Prior to joining Liberal International, she held positions with the International Trade Council of Greater Kansas City, the European Anti-Fraud Office of the European Commission, and the United Nations Secretariat. Ms. Dancheva is originally from Sofia, Bulgaria and holds a Master’s Degree in Politics and Government in the European Union from the London School of Economics and a Bachelor’s Degree in International Business from Rockhurst University, Kansas City, Missouri, USA.

Ivan Doherty is a senior associate and director of political party programs at the National Democratic Institute (NDI). As the Institute’s principal in-house expert on political party development, he currently oversees party development programs in more than 55 countries and is responsible for building NDI’s relationships with political party international organizations and other democracy foundations. Mr. Doherty has also served as a member of the steering committee of the World Movement for Democracy and leads NDI’s participation in a number of other global and regional initiatives, including the Community of Democracies, the OAS Inter-American Forum on Political Parties, and the U.N. Conference on New or Restored Democracies.

Mr. Doherty is an adjunct professor at Georgetown University lecturing on political parties and governance and is also a guest lecturer at a number of institutions including the U.S. State Department Foreign Service Training Institute and the Walsh School of Foreign Service, Georgetown University. Mr. Doherty also served as foreign policy advisor from 2005 to 2008 to Gov. Howard Dean, chairman of the Democratic National Committee.