The Future of Tourism in Bulgaria 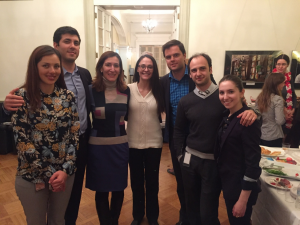 Bulgarian Minister of Tourisms, Nikolina Angelkova (third from the left), poses for a picture with members of the Bulgarian Professionals Club after a lively discussion at the Bulgarian Embassy in Washington.

Whether it’s enjoying the sunny seaside, skiing in one of the major resorts, exploring famed ancient ruins and magnificent monasteries tucked among majestic mountains, or marveling at Bulgaria’s nestinari dancers and appetizing food, there is no denying that Bulgaria has become a major attraction for international tourists.

No wonder, many publications around Europe and the U.S. recommend Bulgaria for your next vacation.

Huffington Post: 18 Reasons You Should Book a Trip to Bulgaria ASAP

During a visit to Washington, DC, Bulgaria’s Minister of Tourism (MoT), Nikolina Angelkova, stopped by for an event at the Bulgarian Embassy, where we – the members of BPC – had the chance to hear about the state and future of tourism in Bulgaria. And we didn’t spare her our probing questions.

The minister mentioned important initiatives under progress, such as electronic registration of resort and hotel guests to make vacationing in Bulgaria safer, as well as improvements in infrastructure to make it more accessible.

The number of international arrivals in Bulgaria has increased steadily in the last decade, reaching nearly 7.5 million last year (blue line on the graph). The contribution of international tourism to GDP is also starting to pick up after a slight decline during the global financial meltdown and subsequent recession in many countries whose residents visit Bulgaria.

The minister discussed many of the challenges in the sector, such as the tension between environmental activists and businesses. Although Angelkova pleaded for searching for middle ground, she acknowledged that it might not be possible to satisfy both sides of the divide. We at BPC agree that finding the balance between quality and quantity, between expansive development and protecting the environmental and cultural richness of the country is of utmost importance. But we raised our concerns that oftentimes Bulgaria’s natural beauty is sacrificed not for increased quality and equitable development, but for the benefit of fringe interests.

A second, related, problem brought by people in the audience was the way tourism develops with the emphasis almost exclusively on quick profits with little regard to long-term prospects. The Bulgarian Black Sea Coast was in this regard compared to the Greek Aegean with the connotation that in the current climate even many Bulgarians prefer vacationing in Greece; and that this could dissuade international tourists. Minister Angelkova maintained the government is aware of the issue and is making strides to address it.

One of her worries was that the percentage Internet payments is still extremely low (at around 2 percent), which is an inconvenience to both domestic and international tourists and hinders quicker development. This might indeed have to do with Bulgarian cultural preferences (both as customers and hotel owners), but we still do not see much concerted effort to address the problem.

Yet, despite these issues, tourism in Bulgaria is becoming more prominent and important to the economy. And the Minster showcased several celebrity endorsements, including those of Silvester Stallone, Selma Hayek, Antonio Banderas, and Adrian Brody (who apparently fell in “good hands” in Bulgaria).

Realizing that a country tourism campaign is only as memorable as the visual that represent it, the Ministry is currently in the process of selecting a new logo. Unlike previous efforts, this is done through a crowdsourcing process. The BPC will keep you posted once Bulgarian Tourism has a new image.